A Dunn County Agricultural Society formed in 1872 and a single fair was held. Fairs were then suspended for some time due to difficulty of transportation. On June 19, 1885 a new Dunn County Agricultural Society was formed when 44 farmers signed a constitution. According to a 1925 Dunn County atlas, the group requested $3,500 from the County Board of Supervisors for the purchase of 50 acres of land east of the city for the fairgrounds. Fairs were held annually except in 1916, 1917, and 1918. The “purpose of the fair was not to make a profit but to create an enterprise of the highest service bearing in mind that prudence requires a margin of safety for continuance of the life of the institution and as provision against the rainy day.”

According to a 1984 Dunn County atlas produced through the Dunn County Historical Society, the County Board of Supervisors appropriated $15,000 for purchase of the fairgrounds. In 1956, the Dunn County Agricultural Society which managed the fair called it quits. A sheriff’s auction was to be held but the Dunn County Board of Supervisors stopped the sale and declared they’d assume responsibilities for operating the fair. They appointed a three-person fair board and charged them with responsibility of conducting an annual fair. Their task was to secure a carnival and revive interest in both commercial exhibitors and junior exhibitors.

In 1970, the Dunn County Board of Supervisors charged the fair board to develop long range program to provide year round usage of facilities. A large multi-purpose building was suggested to be used for cattle shows, horse shows, machinery displays as well as during the fair. The Board of Supervisors expanded the fair board by adding a member-at-large and a county board member. After provision for year round programming began, the Fair Board was directed to continue only with management of the fair and a full time department head was hired to manage the other activities held on the fairgrounds.

In 1999. the fair board was expanded to nine members plus the fair secretary. This allowed individuals to focus on specific responsibilities associated with a particular portion of the fair. The assigned roles are Public Relations and Advertising; Junior Fair – Animal; Junior Fair Non-Animal; Open Class; Food Court and Free Stage; Commercial; Grounds, President and Entertainment. After one year, the Board of Supervisors reduced the board to seven and responsibilities were once again redistributed as follows:  Grounds, Security, Grandstand, Beer Garden, and Staffing; Advertising and Promotions; Sponsors; Exhibits – Non-Animal; Exhibits – Animal; Commercial Exhibits & Community Stage; and Food Court and Free Stage.

Thank you to our sponsors! 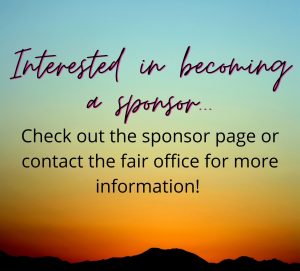 Wednesday – open for set-up and judging starting at 8:00; no admission fee until 3:00 pm

Interested to see what you can do and see at the fair?  Visit the 2020 Dunn County Virtual Fair